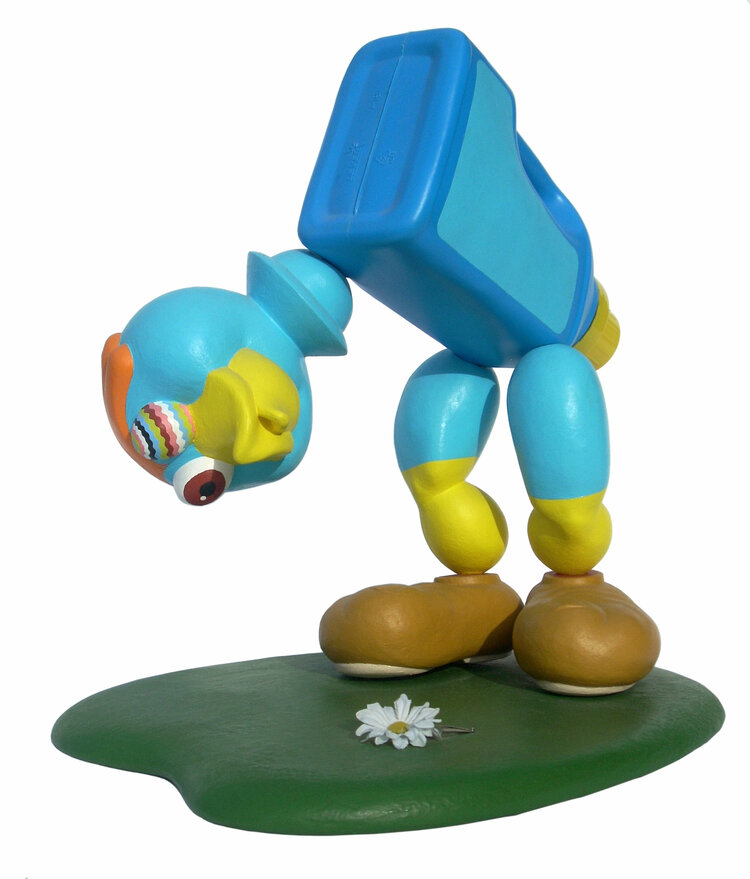 A common thread throughout Lombardi’s work is his interest in blending qualities of highbrow and lowbrow art, and experimentation with various media. His life-long journey began with his exposure to modern art when he first saw a reproduction of Picasso’s Guernica (1939) at the age of 3 or 4, and continued with his introduction to the seductive world of Zap Comix in 1968.

The exhibition begins with the Cyborgs, a science fiction based series depicting half human/half machine beings. It continues through his East Village days, his earliest forays into sculpture and kinetic art, and the repurposing of a multitude of found materials. A pivotal point in his art career was the Post Apocalyptic Tattoo series, which was prompted by his concerns for the environment and how it would impact our future. After the downturn in the economy in 2008, he began the Street Urchin series that focused on the marginalized victims of that era. Most recently he has explored the social issues of our time referencing the roots of human morality.

Visitors to the exhibit will have the opportunity to not only see a myriad of unique and thoughtful pieces, but to also see a physical representation of the timeline of Lombardi's life. The exhibition is curated by T. Michael Martin, Director of the Clara M. Eagle Gallery at Murray State University, in Murray, Kentucky, where it premiered in 2019. A catalog accompanies the exhibition.

Curator T. Michael Martin writes about the artist: “Lombardi’s masterful mix of high and low culture is as current as the day it was created, showing how little the aesthetics of human behavior have changed. In some ways, Lombardi’s distortions are a more truthful look at society than our daily facade of polite policy and political correctness, especially in the way we prompt contention, as Lombardi offers a much-needed change and disruption through his unique sense of humor. Common throughout the works, Lombardi reveals source, influence, and process that allow the viewer a glimpse into the stages of his creations. They are, in essence, an open interpretation, veiled in playfulness, to put forth a more in-depth investigation of some very real concerns. His narrative is staged, directed, and then morphed through mostly unconventional combinations, as the resulting compositions encourage us to investigate beyond the surface of each work. A suggested glimpse into an apocalyptic breakdown of society, where we are allowed to emerge charged, reconfigured, and prepared to push forward, is a cunning execution where questions flow and commentary is made as the viewer reexamines the world revealed around them.”

As always, galleries are free to visit. Pre-registration is welcomed but not required.